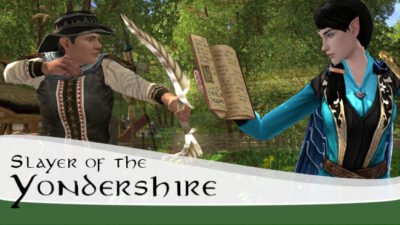 LOTRO Lone-Lands Slayer Deed Map and GuideThe Lone-Lands in The Lord of the Rings Online is the fourth and last of the classic F2P free regions, assuming you don't have a giveaway code. It is here that you can continue to earn LOTRO points as...
Read More → LOTRO Bree-land Slayer Deed Map and GuideThe Slayer of Bree-land Deed in LOTRO takes you all over this vast region, but earns you a lot of LOTRO Points! From the relative beauty of the Southern Bree-fields, to the oppressive Old Forest and i...
Read More → LOTRO North Downs Slayer Deeds MapThe North Downs in LOTRO is an expansive region home to a variety of races. Men and women are found in various places, but especially in and near Trestlebridge. Dwarves have their own fort in the Nort...
Read More → LOTRO Shire Slayer Deed MapFor a starter region, The Shire in LOTRO, is a huge area for a lower level character to explore. There are also a lot of Deeds to be clocked up to earn those precious LOTRO Points and trait points. In...
Read More → LOTRO Ered Luin Slayer Deed Map - Goblins, Spiders, Brigands, Hendrovail and WolvesEred Luin is one of the starting regions of LOTRO. If you create a Dwarf, Elf or High Elf, you'll begin your main questing in Middle-Earth either in Celondim for Elves, or Thorin's Gate for Dwarves. I...
Read More →
Posts Found: 7
Published: 21st November 2022