Reputation factions in LOTRO are a great feature that lets you unlock access to better rewards the more the locals think of you. These can range from simple consumables, to gear, decorations, mounts and more. But they are equally one of the “grindiest” aspects of non-endgame content. In fact, some former endgame factions can only be maxed to Kindred (or whatever the maximum is) if you engage in dailies regularly. And that is where Reputation Acceleration Tomes come into their own.

However, in a recent patch LOTRO removed one of the only in-game ways to earn these. So I thought I would do a diversion and discuss How to level reputation faster without accelerators (mostly).

What are Reputation Acceleration Tomes?

If you’re fairly new to LOTRO, you may not have come across these bits of reputation delight. Coming in two forms, reputation acceleration tomes give double reputation up to the value of the tome:

How Much Acceleration Do I Have Left?

To see what is remaining of a tome, go to Character Panel → Reputation → Scroll to the Bottom.

So, What’s the Problem?

The “problem”, for want of a better word, is that you used to be able to acquire the

Small Reputation Tomes at Skirmish Camps. This meant that

Medallions could be exchanged for rep boosts. The only other in-game way you could be sure of earning them was in completing the weekly [Missions] wrapper. And not all of us can, or want to, grind missions.

the Skirmish Camp option was removed, leaving only the Missions method.

How to Level LOTRO Reputation Faster

…without reputation tomes? There are few options, but there are some even if they may seem obscure.

Leave a Region’s Reputation Until Later

From a role-playing perspective, it has always made sense to me to hit Kindred (or maximum rep) before you leave a region. You’ve worked your behind off clearing the quests and deeds. And before you left you grab the cosmetics and/or reputation mounts as a huge self-praise “well done”.

Why Waiting is ‘Quicker’

Well, if you’re looking at how to level reputation faster, then that’s not the most efficient way. A region’s deeds – exploration and slayer both – are quicker to do once the enemies in the area are grey/trivial. So if you over-level and over-gear the area, then they become easier to clear. If your target region has reputation items, then defeating the relevant enemies to “farm” them also is simpler.

So, you can no longer exchange

Medallions for reputation accelerators. But you can use them to buy reputation consumables.


The relevant factions are

Start a fellowship with a friend when you do deeds or farming of rep items. Doing this will help you clear the mobs far easier and therefore quicker. An alternative to this is to Dual- or Multibox and then farm. This way you can trade with the other player (or alt), helping both characters to level reputation faster.

While not all regions have these, many do. In those where you can loot (or barter for) reputation items, then use them. Once you’ve maxed out that faction, save your excess for another character.

A few patches back, LOTRO introduced minimum quest requirements to be able to use reputation items. Before then, all you needed, was to be a minimum level. Now you have the (if I’m honest, silly) situation, where you may have used a Valar to level an alt to 130, and have to go back to do some quests earlier in the game to be able to use Mathoms for Shire reputation.


But if you meet those requirements then consume those rep items!

In certain regions, you can purposefully target mobs that drop reputation items: e.g.

If you take this approach, please be considerate of other players, because very often these enemies are also in the Slayer Deeds.

But I Still Want Accelerators!

I hear you. Really I do. Here are your options.

gives you the option of choosing Bonus Character Boosts

. From that, you will acquire a


Though, admittedly, this is only a 2,000 reputation boost for completing 45 missions (or 1,000 for 15). If you have a different reason for doing those missions, then that’s a nice bonus. But if your motivation is to get the tomes, it’s a lot of work.

There is a chance that a Reputation Acceleration Tome can drop from Gold Hobbit Presents.

You’re at the mercy of the RNG dice I’m afraid. And if you’re not a VIP then even this is not available to you.

The only other free way of obtaining Reputation Accelerators is to earn them. This you can do by completing LOTRO deeds that grant

Some of my Deed Guides 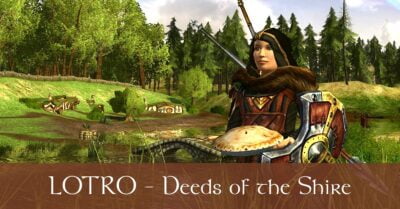 Not all deeds grant them and some regions may not grant any (or barely any) at all. Yondershire is one such region.

If you’re a VIP/Subscriber, you get a bundle of free

LP each month. Resist the urge to spend these on even more storage and save some for the tomes. Which brings me to the last point.

In the “money store” you can buy regular (i.e. “not small” rep accelerators). This tome is for a bonus 5,000 reputation per tome.

This does make the bundle a better deal – it’s like “buy 4 get 1 free”. I called it the “money store” because LOTRO is the only MMO I’ve tried (or played properly) that let you earn a decent amount of the currency to spend in the store1. Others do, but in such small numbers that they’re practically useless.

250 LOTRO Points can build up quite easily. If you quest on-level, then you’re forced to attack enemies that qualify for deeds, for example.

Pointers for LOTRO Themselves

In this last section I wanted to just have a think about what LOTRO could do to improve the reputation-earning situation. I’m not in SSG, I cannot influence policy and I don’t know how much engineer work is needed to make things possible. But being on the outside can help see the bigger picture. Here are some ideas that LOTRO could implement to remedy the lack of tomes problem.

Before launching into these ideas, I just want to add that all earnable reputation boosts should be bound to account on acquire. It just limits the motivation for hoarding them to be for your own personal benefit, rather than to try to make in-game coin on them. That’s just my opinion of course!

Except for regions that drop reputation items, or grant rep on enemy kills, there is no logical reason that all that and area’s quests and deeds should not give you Kindred standing – except on the current end-game content where dailies need to be encouraged. This involves a long look at previous endgame areas, where you may need weeks of grinding dailies for no other benefit than the rep standing. Here are some I’ve not yet maxed despite having cleared the deeds and quests:

And I haven’t done all the “mini factions” of Dol Amroth yet. Not only do they require dailies, but you can only complete six of those quests a day. And they come in groups of four quests per “mini faction”!

Grant a large reputation tome, say on a 5% chance on a Silver Hobbit Present roll and 10% for a small one. Currently, tomes can only be acquired from Gold Hobbit presents, and removing the small ones from the Skirmish Camp affected all players whether VIP or not.

When you max a reputation faction, one of the rewards could be 1 ×

Large Reputation Accelerator towards the next faction. Again, therefore, you have to work/play to earn it but it would encourage people to do so.

Destiny Points are granted to VIP users every time a character on that server levels up. They can be used to buy a range of temporary boosts, such as XP or stats. Uses of destiny are also capped over a time period – five uses in a week, I believe. Why not let Small Reputation Tomes be one of the options? Five of those is the equivalent to 1 × large tome. And because uses are capped, again, hoarding is not an option.

The first faction that comes to mind is the Eglain. One of the explorer deeds requires you to find two locations that are in two different group instances, such as the Spring of the Red Maid. I’m sure when the game first came out, it was to encourage people to jump into group content. But with LOTRO being huge these days, people want to progress through the stories. In Gondor, I can’t complete some of the deeds because they require Warband Completions

, some of which require groups. It’s time to rethink the policy on this.

If a region is the current end-game, then sure, require some group participation. But once it no longer is the latest region, tweak the deeds. You you could still honour those who completed the original deeds with a different mount and title, for example.

Tomes for Figments of Splendour

Say one motivation for restricting earnable reputation tomes was that it discouraged players from playing certain aspects of the game. In this case, you swap the aspect you’ve just blocked off (in this case “the earning of Marks and Medallions”) for another method.

Figments of Splendour are earnable – through festivals, or by exchanging

Motes of Enchantment. And they have currency caps, so you couldn’t bulk-buy 100 reputation accelerators! LOTRO could restrict it further and only have this option available when the Curator is in Bree.
Section Menu ↑

Got Any Of Your Own Tips?

If you have any other reputation hacks, speak to me on Twitter or message to me on Facebook. If I think it could be added to this post, I’ll do so and credit you.

You can chip away at many just handing in tasks. Slow but steady 🙂
@Mephit

Yes, thanks for the reminder! It’s not quick, as you say, but if you keep a collection of task items in your bags (or carry all), you can help it along this way.

Removing one source of earnable reputation acceleration tomes made levelling reputation faster a harder task. But it can still be done. From the players’ perspective, you can leave the reputation until a much higher level, quest with a friend, or earn LOTRO Points to acquire the tomes from the LOTRO Store. But, whatever their reasons, I think SSG should have a long look at reputations through the game and ensure that hitting max rep is an enjoyable experience, as well as opening up potential other acquisition methods. We’re all here to support a game we love, so let’s not make one difficult situation wreck our experience of Middle-Earth.