Welcome to the final part of the Swanfleet exploration deeds in Before the Shadow! Today we’ll be taking on the Trophy-hunter of Swanfleet Deed. Here, you’ll be tasked with finding six named creatures and carrying a piece from each of them to Glen Helyg to go into a Stoor’s stores. I’ve given you a screenshot of them all with their coordinates and a maplet. So, hopefully, you’ll spend less time than myself with the combined forces of the LOTRO-Wiki did in clearing the deed! Let’s go.

With the sole exception of Norlúg, all the others roam around various coordinates. I have attempted to show the rough areas they might be found in. This is why the numbered circles on the Deed Map are different sizes.

Expect to have to scout around a fair amount.

If you’re a Hunter, then all these Trophy targets are creatures of nature. That means you can use Passage of Nature to find them all, once you’re in the right area.

Check your keybindings for “Select nearest” and “Select next” for enemy-related ones. “Next” will be your tab key by default. But “Nearest” can be handy too, if there are other enemies or non-aggressive wildlife near you.

For the rest of us non-Hunter mains, there are

Tomes of Tracking. These mimic the Hunter’s skill.

Use the tome, locate your target in the list and hit “track”.

If your target is out of the area indicated in your minimap, then a red arrow will point you in the right direction. Once they are within range, a red dot will appear. The tome continues to work when the creature moves, so it is a real-time position.

The only thing to be aware of is that, for some reason, LOTRO have set the tome window to auto-close after a certain time delay.

Thostmoth is a huge bog-lurker. Yet, despite this it took me quite a bit of time running around to find him. I also think that LOTRO have made Thostmoth really pretty. It’s almost a shame that you have to collect a trophy for defeating it to please a Hobbit. Drindolf is a Huorn that hides in plain sight among the trees of Western Eregion. It does stand out against some of the other non-enemy trees as it’s autumnal red, rather than green.

Just a word of caution: if you are on-level (ish) there are Meandering Holly enemies around here too. Gristbite is a Neeker-breeker found to the far East of Wadewater. I had to use a

Tome of Tracking to find it. As with the others, it does wander around, though.

You may find it’s easier to start at Lhan Garan. From there head North and a little West. Gnaw is a rather large and exceedingly-cute shrew scurrying around the grasses of the Stoor-vales.

The location can be hard to spot on the map if you have all the symbols on. But if you leave Glyn Helyg and head a little North, you’ll quickly come to the approximate area.

If you don’t have any tracking tomes, I suggest turning frills down very low in your graphics settings. Putting floaty names on will also help you to spot Gnaw. Stoneback, rather unsurprisingly, is a huge turtle. Well, I thought he was huge when I was playing my Dwarf. Perspective, and all that!

Either way, Stoneback can be found plodding around Gwâl Cruban in Wadewater. There are some other much-smaller turtles for your entertainment too. Norlúg is a rock-worm that is not found anywhere near other worms, that usually inhabit Wadewater. I had to check the Wiki which said Norlúg could be found:

All the way on top of the hill

So, I did some climbing. Here’s where you can expect to find the worm: Hand In Your Trophies

The Trophy-hunter of Swanfleet Deed is not just a mini-slayer deed. Simply defeating them does not progress the deed. That is because each foe drops…wait for it…a trophy! I bet you’re as shocked as I was. By that, I mean, not at all.

What are they Called?

Where are the Trophies?

The trophies go straight into your bags. Use them to trigger a quest related to that particular disgusting piece of your kill. It is when you complete these quests that the deed progresses.

Unhelpfully, LOTRO put “in Swanfleet” into the quest tracker text.

Helpfully, they flag up in the right location on your map. But in short, you can find Addo Benchuth outside the waterwheel near Glyn Helyg.

You can then enjoy hearing what he plans to do with these dismembered animal parts. Before backing away slowly and letting yourself be swept downstream.
Section Menu ↑

Although I’ve given you “maplets” for each of the hunting targets, a region map can be helpful too. So here it is:

Once you have handed in all six trophies to Addo Benchuth, you’ll receive:

More on the Wiki

You can find extra information and a few other coordinates over on the Wiki.

And thank you to the Wiki for letting me use some of their scouting work to plug the gaps in my own.

You may not know about this deed until you either complete one of the other Explorer of Swanfleet Deeds. Or pick up a trophy by defeating a named creature, without realising it had a quest attached. The Trophy-hunter of Swanfleet Deed does make you run around a fair bit. After all, nature doesn’t stand still. At least, not the enemy variants!

But you could couple this with the Perils of Swanfleet or Treasure of Swanfleet. Have a day of wandering! Just remember: have fun in Middle-Earth, don’t just tick items off your to-do list! 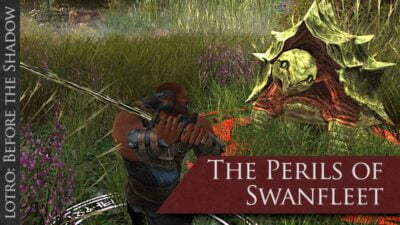