Having had Fibromyalgia for probably over twenty-five years now, like many people without a chronic illness, life has changed many times over. But there are “normal” life changes, like going to university, leaving home, getting married and so on. I’m not referring to those, as challenging as they can be for anyone. I’m talking about those that have been forced on me as a result of a worsening of my pain levels. It was a Mahli Quinn Art Facebook post

reshared by a friend of mine who has M.E. that reminded me that I’m the Used-to-Do Guy.

Sure, Fibro is a nervous system and brain communication problem, but it tends to come with some “fun friends” – or comorbidities to use its technical term. Being in pain all day means I suffer from depression. It’s also massively tiring so, although I’m not separately diagnosed with Chronic Fatigue Syndrome, I am chronically fatigued. The combination of Fibromyalgia, depression and fatigue really quickly explains why I’ve had to give up certain things.

What I Used to Do

As it wasn’t really until university that my pain levels started to spiral out of control, I didn’t really have to pare back anything until sometime during those years. Even then it was easier to push through, take the meds I had and live life as a “normal” person, whatever that meant. Here are the things I used to be able to do, either before the pain or when I could manage the Fibromyalgia symptoms enough to continue.

Read: You Behind the Illness → As nerve-wracking as performance – either solo or in a band/orchestra was – I did enjoy playing the clarinet((Image Credit: BobMcEvoy on Pixabay)). And I passed exams in my ten years or so too. Eventually, I also played the saxophone for a while too. But these wind instruments require a certain “grip” to play, and my hand pain just can’t handle it anymore, even with compression gloves. I haven’t sold my two-tone wooden clarinet, though. I can’t bring myself to.

It sounds linked to the clarinet – and indeed it is. But I taught myself to play the keyboard from church songs, and sometimes I played it with a band in church. I had to give that up many years after the clarinet because the technique is different – it’s an impact method rather than grip. As I had no lessons, I’ve never learned how to play it correctly. The last time I played keyboard it was at church and I ended up crying due to knuckle pain afterwards. I accepted the inevitable.

Music is still part of who I am. I sing at home (on my own, but I can sing) and on the rare occasion get to harmonise with wifey. I listen to music on days I’m not sound-sensitive. And I love to listen to music in the games I play. Although a nervous driver, there was a certain “something” about being able to drive. The freedom of the road maybe, or the fact that usually driving implied purpose. But now, I’m either too tired or in too much pain to drive, or my meds are trying to work and therefore my judgement is impaired. Oh, and now I’m not legally allowed to drive for at least another six months due to idiopathic epilepsy seizures.

The silver lining here is that now, I don’t need to drive anywhere. Although this sounds negative, because I don’t need to go anywhere, it’s not a bad thing. It would be far worse if I had to drive to work and suddenly found I couldn’t.

I’ll start this by saying I’ve never really been great at socialising. I wasn’t popular, didn’t enjoy most sport, and I couldn’t understand the guys my age. I would never be so bold to say I understood girls, but I understood them better. Most of my best friends I’ve made in life have been female.((All these friends were those who see themselves as female in the binary sense. I hope that makes sense without offending anyone.)) But, mostly due to my parents pushing me (the correct thing to do, I add), I did go to youth groups, or on musical tours. And of course, university life is sociable to the degree you choose it to be so. But once I made a friend, it didn’t take much out of me to do something with them.

Now a phone call to Dad that lasts 45 minutes drains me. I can’t do church in person now, because the travel is tiring, and people want to talk to you. And I have “social anxiety”. Even a couple of hours chatting with wifey means I need quiet own time. Frankly, it’s ridiculous.

are super-understanding. This way, I can dip in and out of being sociable as I feel up to it. I’m blessed to have such a supportive audience in a world of Internet trolls. Thank you.

Normal Work and Running a Business Whether you have a boss, or you have your own business, someone you’re working for has the right to expect a certain level of performance, in a reasonable timeframe, at a reasonable cost. In short, working implies a certain level of “stress” (and not all stress is bad). However, Fibromyalgia comes not only with pain and fatigue, but brain fog – a woolly feeling inside my head that makes thinking difficult. And when stress gets worse, so too does my pain level.

In the past I’ve had two accounting jobs and later ran a web services business (with a small team of employees). In both I was aware of my performance slipping as my Fibromyalgia symptoms worsened and tasks taking longer. As an employee, this means you cost your employer more for a project. In business, this means either an extra cost to the client – either financial or in a delay to completion dates. Both ended for very similar reasons.

Because I’ve not only had one job, I’m used to changing and adapting “what I do”. This has made finding ways to keep myself busy without a “normal job” much easier.

Read: Where My Dreams Went to Die → Earlier on in NJ’s life, I did some Twitch streaming

as a way of using a hobby to connect with people and maybe earn a few pounds here or there. I was also humbled to be on the official LOTROstream

team for a time too.

But the more time went on, the harder I found it to concentrate – and it is sociable, so requires what I now call “social capacity”. I’d like to point out that, although my audiences were always small, I absolutely loved their interactions, and they often made me smile. But I needed a couple of days of rest afterwards, which meant my blog was partially neglected. So, I used to do that, but now I’ve even deleted my Discord account, so there’s less invisible pressure and fewer visible notifications.

For a short while, I had the honour of being on the content creators programme for Star Wars: The Old Republic

. But during that time, I was experiencing difficulties in playing the new content and some of the old issues I had as an employee were rearing their ugly heads. I couldn’t do stuff well enough or fast enough, and other influencers were producing amazing content at record speed. And with my brain fog, I was struggling to come up with ideas that fit within the parameters (rightly) required by SWTOR. I felt bad coming out of it, but better out than feeling like I was doing a horrible job that someone better could be doing. Even if that feeling was wrong, I still felt it.

Being on the team at all was a morale boost. And everyone, including my main contact at SWTOR, were really supportive throughout my time there. Thank you.

I love how much @LOTROfamily

has achieved since I stepped back from the team, and I’m glad I initiated it. But social media is called that because it should be, first and foremost, sociable. This means, by its very definition, I need social capacity. I had to focus on fewer things, and anytime I missed a day of #LOTROfamily

– and try to answer comments within a reasonable timeframe. I cannot be everywhere all the time, especially when I’m too tired and in too much pain to even try.

#LOTROfamily has brought people together, including helping to raise awareness of community events. People continue to use the hashtag, which is awesome.

Although I have “moved on”, sometimes remembering these things can make me feel inadequate and incapable. I do what I can to try to focus on the current moment and tomorrow, but I’m not immune to regret.

Sometimes I have to do what I call “Being Real” posts. People are used to visiting my site for LOTRO content, event guides etc. And often you search for things that you assumed I had already done. This is a compliment, believe it or not. Some of those searches I will try to fulfil around festival work. But I think sometimes I just need to put down how I am feeling now and when I’m making those guides. However, I will try to remind myself of the positives.

TL;DR The Used-To-Do Guy Looks Back – and Forward

With worsening Fibromyalgia and fatigue symptoms, I have had to give up many things that would be the choice for many others. From playing musical instruments, to “normal work” to even fun things like streaming games, it has been my health that has dictated those life changes. And even those items I have spoken about are not everything! I’m making this Part 1, because I want to do a “looking forward” post too, because doing nothing is not an option. The Used-to-Do Guy has had to become a Now-I-Do Guy. So stay tuned for Part 2. Thanks for reading! 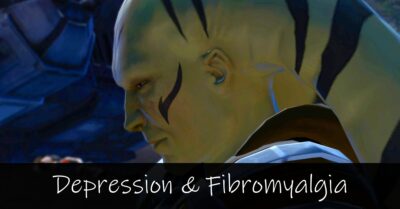 Depression and Fibromyalgia: Caring for Your Mental Health Through Pain
Read Now → You Behind the Illness - Who Am I Underneath the Fibromyalgia?
Read Now →