The Lord of the Rings Online has many different features and aspects that enable you to vary your experience of the game so you can enjoy it your way. One of those features is LOTRO Missions. Available early on, you can explore some content and people groups often above your character level and experience stories away from the main Epic questline. So here is my introductory guide to Missions, where I’ll cover how you can get them, where they can be found and the types of content available in them. Let’s get into it, then!

What Are LOTRO Missions?

Missions are short, standalone solo or duo instances with certain objectives. Some of them follow a distinctive story, though some (like the Wildwoods ones) are like “continuing the effort”, rather than sequential.

From Patron (MEW):
You can do them as a duo and if you are two different levels the level is set by the character that opens the mission.

I found that out with a friend who was leveling doing missions and I was doing my wrapper quests. So, he could do it higher level but when we did them 5 levels below they go very fast.

Here are some of the key features: A key feature is that they scale to your level. This brings challenge with it as you cannot over-level them. As such, it also leads onto the next feature:

Missions offer either a complementary system to traditional quest and Epic levelling, or you can use them to level instead of other methods. They give you greater freedom to choose how to level up your character, so all your alts need not follow the same path. Because the quests are on-level, so too is the loot. Whether it’s task items, gearing drops or crafting materials and scrolls, they’re appropriate to you. Even if you’ve never been to the regions they would usually be found.

Some have reputation factions, Karum-Ubnâr, The Gabil’akkâ but others are purely dependent on the number of tokens you have – e.g.

Missions also contain Twists – mechanics and features you will encounter during the Mission. These might be environmental like susceptibility to Frost Damage, or enemy-related such as them fleeing for reinforcements, or rallying around a champion or leader. Each related quest only has one specific Twist.

For some example Twists see my Elladan and Elrohir Missions Review.

There are only two ways to gain access to them:

VIPs, or subscribers, have access to all LOTRO Missions regardless of whether they have obtained the related expansion or not. So this would remain true for you, while you are subscribed.

Should you choose to stop being a LOTRO VIP, or your subscription accidentally lapsed, you would lose access to those where you had not separately acquired the related item or expansion. , The Fate of Gundabad and Legacy of the Necromancer

What Level Do Missions Start At?

When you’re in one of the regions where you can do your dailies or other wrappers, you’ll find a Mission Recruiter. They can transport you to relevant zones without scrolling past irrelevant ones. This allows you to clear daily wrappers for each faction or region more efficiently.

Certain towns and all homestead neighbourhoods contain Far-Reaching Stable-masters. These transport wizards can ping you almost anywhere in Middle Earth!

Just be careful to only pay 1× The Further Adventures involving Bilbo Baggins and Elladan and Elrohir begin in Rivendell. The Wildwood Missions can be found in Trestlebridge. Both of these are “traditional” Stable-master destinations, so can be reached with “normal” horse taxis – or your own mount or feet. Or knees, if you wish. Handstand your way there. I’ll stop talking… 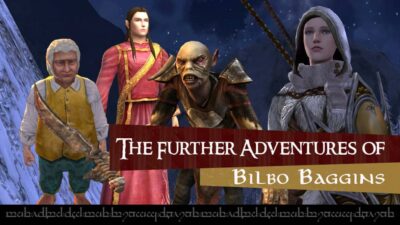 Bilbo’s Further Adventures take place through Missions and therefore is not part of a wider expansion. From Rivendell to the Trollshaws and the Misty Mountains, you investigate where the famous Hobbit has gone to. Normally, he is writing in Rivendell Valley or the Last Homely House but has disappeared. And not in a “magic ring” sense! Follow the story to find out where he has gone and why.

Speak to Celeblír to get started.

Further Adventures of Elladan and Elrohir 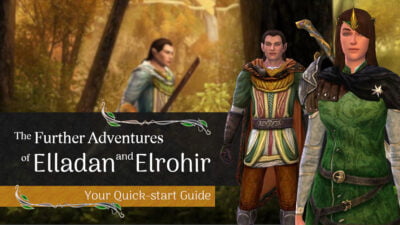 The sons of Elrond have been given a secret mission of their own that starts by investigating the Fords of Bruinen. But their journey takes them far beyond the Trollshaws, eventually to the Golden Wood of Lothlórien. It has unexpected plot-twists and some really touching moments.

Once you have access to these Further Adventures, speak to Elrond in the Last Homely House to begin the journey.

The Wildwood of Bree-land The Missions in the Wildwood of Bree-land are, story-wise, an aside. However, if you undertake them after having completed the tales of both the Woodcutter’s Brotherhood and the League of the Axe, they make a lot more sense.

Continue the defence of the Wildwood and earn different rewards to the reputation vendor. Speak to Radhril at Trestlebridge to undertake Missions and barter for rewards. Region/Expansion: Legacy of the Necromancer

. If you’ve lost it, or accidentally filtered it, travel to Akrâz-zahar and speak to Vorthur Smokebreath Region/Expansion: The War of the Three Peaks

If you have the relevant expansion, then you should have received The War Effort Needs You!

as an auto-bestowed quest. If you’ve misplaced it, then travel to the War Room of Annâk-khurfu To start missions for the Zhélruka, travel to The Hall of Vérnozal and pick up The Rightful Claim The Before the Shadow expansion is launching in very early November 2022. The new Delvings System has been announced and LOTRO told us that this will apply to new missions added, starting with BtS.

Instead of offering gear via quest rewards, Missions grant relevant tokens for the faction or classification. To anyone who attends LOTRO Festivals and Events even occasionally, this will be familiar. For example, both the Bilbo Baggins and the Elladan and Elrohir missions grant

Tokens of Further Adventure, whereas Wildwood ones give Bree-land Woodmarks. 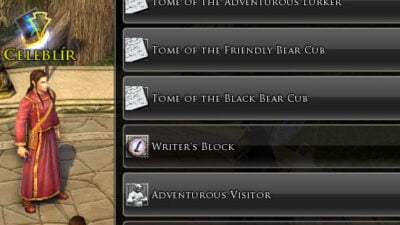 For the Further Adventures quests, you have no reputation to earn. Simply complete more Missions, receive more

and barter them when you have enough for what you want.

For some Mission “Centres”, the rewards you can acquire are limited to the

Reputation you have with a specific faction. And how many related tokens you have not spent! This is the same as other reputation factions across Middle-Earth, so is a familiar system.

If you do use LOTRO missions as a main way to level a character, remaining geared well enough for them could have been challenging. Thankfully, SSG built combat gear into the rewards for some of the factions, at least. So you can gear up with Missions Tokens. Naturally, you can also do this through crafting, Skirmish Camps or any of the other myriad methods built into LOTRO too.
Section Menu ↑

weekly wrappers for any mission. You may also find specific regions have dailies of their own.

On a Mission (Weekly)

Complete 15 × Missions. It does not matter which faction, region or storyline. They all count.

On a Continuing Mission (Weekly)

Complete 45 × Missions. All types of missions count for this too.

You may find that different regions or factions have their own wrappers as well. These are a chance to earn bonus tokens and reputation. If you’re going for even On a Mission (Weekly) then you may clear the faction wrapper too. Just remember to pick it up before you dive into your quests!

A Mission to Bring Good Cheer

This Yule Festival quest is, as far as I remember, the only LOTRO Event to incorporation Missions. Many (including Yule) have Seasonal Instances and Ill Omens is based on Skirmishes.

But during Wintertide, you can complete a Mission to earn 1×

, which also counts towards the daily wrapper.

Phew, there was more to cover than I initially realised! LOTRO Missions are a great way to see new places, earn new rewards and level up. They’re also really short, so could be a great filler for those snippets of game time. I hope this introductory guide to the Mission system was helpful. Hopefully soonish, I’ll have more to say about the Dwarf missions once I have played those ones enough. However you choose to spend your time in LOTRO, make sure you’re having fun in Middle-Earth!