A Flurry of Fireworks is a Seasonal Instance first introduced during the LOTRO Anniversary Event in 2022. It can be played Solo, or in groups of two, three and six. However, this guide will cover the Solo Version only. In it, you are helping Gandalf the Grey to get his fireworks in position at various points up the hill above Bree-Town. How the quest progresses and which NPCs join may vary each time you run it, though. There is a reason for this – and a Deed that relates to it. Lastly, there’s also a daily quest inside the instance to add some variety into your wrapper completion. So here’s your walkthrough guide to A Flurry of Fireworks:

How Do I Start A Flurry of Fireworks?

To begin the quest, open the Instance Finder panel, which can be found in the buttons at the very bottom of your screen (if you use the default UI layout). The quickest way to find the instance is to: Sparkling Sparklers is an extra

daily repeatable. This means it counts towards your Another Lovely Year daily festival wrapper.

You can actually pick up this daily and begin it before progressing the primary quest. The same was true of Bees Big Business, and I like this freedom to choose LOTRO have given us.

Give sparklers to the children of Bree × 12

Note: you cannot Thwart Nosey Hobbits until you progress the conversation with Gandalf. It also seems like the Nosey Hobbits cannot interrupt your sparkler-giving if you haven’t properly continued A Flurry of Fireworks either.

As soon as you start Sparkling Sparklers, quest rings appear on your minimap. Assuming you haven’t continued A Flurry of Fireworks, then all the rings will be children you can give sparklers to. Well, Gandalf has one too. If you have continued the main quest, then two of the rings will be Nosey Hobbits. I’ve shown this below (or on the right if you’re on a large-ish screen).


Click/tap a thumbnail to open the full image.

You will find 10 Children near Gandalf and around the starting area. Just be aware one child is slightly down the hill and on the left. By “down the hill”, I mean stand back-to-back with Gandalf, walk forwards and turn left when the path lets you.

Where are the Other Children?

The other two can be found up the hill near the house. Simply follow the path and you’ll easily reach the house. This means you can complete Sparkling Sparklers then return to Gandalf to continue A Flurry of Fireworks.

A Flurry of Fireworks Solo Walk-through

And now we come to the actual reason for you being here: A Flurry of Fireworks! As I said earlier, the aim is to set up fireworks. The instance is divided into three phases – three being a magic number in quests, of course. Each stage follows a similar pattern:

On the first two phases, Gandalf and his Cart rejoin you. The last phase is slightly different, but we’ll get to that.

You will notice in your quest tracker that one of your objectives is to Thwart Nosey Hobbits. Unlike the Quick Post quests in the Shire, you do not achieve this purely by avoiding them. However, if you get close to them and are not scolding them you are stunned for a few seconds. So, speak to them and scold them away1.

There are 2 × Nosey Hobbits to tell to scram! They have floaty names and quest rings, and they make inane comments, so they’re not difficult spot. Also if your NPC talks to them, they’re being hindered by said Nosey Hobbit!

The Exemplary Escort
Collect 2 × Crates of Fireworks then heading up the hill with one of the two possible Elves for this stage. On the way, though, you will be periodically attacked by groups of enemies. Which ones you face depends on the story being recounted by your NPC.

If you haven’t cleared the first ten children for Sparkling Sparklers, then once you’ve reached the banner safely, head back down and do it now. It saves running down the entire hill at the end of the instance.

Note:
Don’t progress Sparkling Sparklers any more until you reach the second banner. Your helper will not stop running just because you want to do something nice!

Gandalf and his horse and Crate Cart arrive further up the hill. Pick up more crates of fireworks. On this run, a dwarf named Flík was my assistant. He also said something about being surprised to meet you so far from Deep Descent – whether you’ve been to Moria or not! The same is true of the other NPCs’ greetings. And you follow them up the hill again.

As before, you’ll be attacked by something relating to the NPC’s story. Generally speaking, don’t worry about protecting your NPC helpers, just fight for yourself, even though the eternal Elf and the proud dwarf do both break down crying at certain points. On my Level 30 run, Flík has 166,000 HP, so they’re fine! The goblins don’t net Flík.

Before you can do so, however, a Ruffian Hermit attacks you because he “wants to complain about the noise”. Take him down and you’ll get the message “you have resolved the complaint”! This has echoes of a certain other complaint quest in Evendim.

This is the only enemy that is the same regardless of who your helper is.

(Only If Not Already Completed): Before you claim the second banner, head back down the path a little to this house. Your remaining two children required to complete Sparkling Sparklers can be found here.

Once you’ve done that go back to the NPC and use the second Festival Banner. Doing that brings Gandalf to “assist you” – though who is helping who, really? Fireworks crates are stacked near the banner, so it’s time to grab more from the cart again.

On this run, Robb Thornley was the NPC “helping” out with the display preparation. His story has a mini quest chain in Bree-land, where his wife sends you to find him – only to discover that he’s been captured by Orcs.

On a third character I was joined by Lalia, who recounts her story of being rescued from the Barrow-Downs. Her stories, naturally, include Wights.

Correction: There are other NPCs. And it is “NPC-mon Go” – Gotta Catch ’em All? Or, more formally, the Helping Hand (Anniversary) Deed.

When you arrive at the crest of the hill at a small circular ruin, Robb (or whichever NPC you’re with) lets drop that he accidentally lit the fuses early. There are already some crates of fireworks inside the ruin, along with “Lit Fuse” enemies. These need to be defeated – and yes, they do head for the crates, so it may be possible to fail the Instance at this point.


On my L30 run, the Lit Fuses came in three rounds. Defeat them all before claiming the third banner.

Stand in the centre of the stone circle. The Lit Fuses appear to aggro you first if you stand there.

Once you claim the banner, the instance will turn to night time. You need to refind Gandalf the Grey to launch the fireworks display.

Head back to the Second Banner, passing half-started crates of fireworks. Gandalf is there waiting for you.
Section Menu ↑

Get Your Festivity Tokens!

Every single Seasonal Instance, I forget at least once to claim the Festivity Tokens

! Make sure you retrieve these from the Fireworks Chest before speaking with Gandalf a second time to leave the instance! So
Section Menu ↑

Firstly, thank you to Kari on Facebook who clued me in to the fact that there is a deed for A Flurry of Fireworks. Also props to @MVPtheBrave for confirming it can be completed on any level.

The reason I did not know about it is that I have run it some ten times on one character and no deed has triggered. I think I now know why.

Earlier I mentioned different helpers coming to join you. These are not personal to your character, but a random selection from eight possible NPCs. These are:

How to Complete the Helping Hand Deed

once you have helped all eight NPCs you’ll clear the deed. But it’s not quiet that straightforward. Each stage of quasi-skirmish has a different group of helpers it randomly selects from.

Additionally, the Wiki says this:

This deed can be completed by doing the quest A Flurry of Fireworks at your level during the Anniversary Event.

I didn’t know about the deed until the weekend just past, because I nearly always run Skirmish-type content a few levels below mine. I’ll have to try and do this (again) at least on my main, as there is still a week of the LOTRO Anniversary Event left!

Here are some questions you may have:

Why Are There Goblins/Trolls/Wights In Bree?

It took me a bit to realise (meaning “I failed to read the obvious on-screen message”) that the enemies you face are not “real”. It is the stories the NPC helpers are telling which are making your progress up the hill slower than Gandalf would like. Yes, you have to fight them, but you’re just playing a part in their storytelling. Neat.

What’s the Lowest Level I Can Run It On?

Does It Count Towards the Daily?

The instance itself does not, however Sparkling Sparklers does.

TL;DR Get that Flurry of Fireworks Started!

A Flurry of Fireworks (Solo) is a fairly quick, Seasonal Instance that is more about teamwork than fighting. (*cough* So many goats! *cough*). The Sparkling Sparklers daily

is easy Solo, and a lovely touch. Celebrations are for the whole family, so I do like it when LOTRO include children in this kind of way. I hope this walkthrough was helpful. Don’t forget my Anniversary Event Guide and Anniversary Celebration Rewards are resources to help you make the most of the Event too. Have fun! 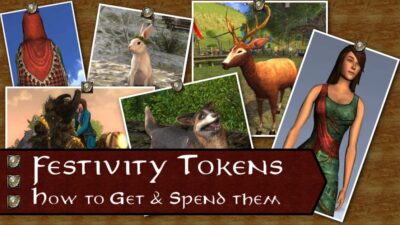